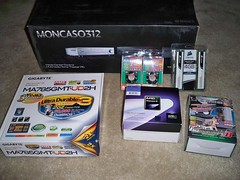 It’s been about about four years since the original Entertainment PC was put together. There have been quite a few small changes and upgrades made since then, but it finally reached the point where things were starting to go south a bit too often with this box. Looking at the current conversion of human years to computer years, this box was about 40 years old. So I harvested some of the computer organs (drives), and set to work on building a machine that would first of all, function, and secondly, last a bit longer with a bit more upgrade flexibility. The issue with the previous computer was the case it was built with. Don’t get me wrong, I loved that case (Aopen EPC945-m8), but it was just a bit too locked together to be upgraded. It was purchased as a bare-bones machine, so it would be very very difficulty to pull out the motherboard, or swap out any vial components. The main issue with this was support for newer operating systems. Vista support for this box was poor, and Windows 7 was even worse, and from what I can tell Aopen has basically stopped support for this product, so new drivers weren’t going to happen. No new drivers meant no new OS (I tried Windows 7, and it wasn’t pretty), so it’s time to upgrade to a more flexible Home Theater PC (HTPC).

OK, enough about the old box, what’s in the new one? The first thing I chose was the case. I wanted something that didn’t look like a computer, since it sits out in the open right under the TV. I looked at a handful of slim HTPC cases, and ultimately landed on the Moneual Black Aluminum MonCaso 312S. It got pretty good reviews, and was simply a case, and not a bare-bones system. That means I got to pick my own motherboard (micro-atx), power supply (atx), and all the rest of the guts for the machine. I did not want to run into any sort of incompatibilities in the future, and not be able swap every piece out for something else, something I wasn’t able to do with the old Aopen case. The case doesn’t have a whole lot of bells and whistles. It’s got a card reader, and several USB/Firewire ports on the front panel, and included a remote and IR receiver built in (so I don’t need to hang some ugly USB receiver off of it). Outside of a little difficulty getting hardware installed (which is inevitable in a case this small), I’m pretty happy with how the MonoCase 312 looks and performs.

Several items moved over from the old machine, the LG DVD/Blu-ray drive, the hard drive, and the video capture cards. Everything else needed to be purchased new though to get this new box up and running. I spent the most time determining what motherboard to put into it. I went back and fourth on weather or not I needed to get a dedicated video card like I had in the previous box (ATI Radeon 2400 HD). I ended up going with integrated video on the motherboard. I made that choice for two reasons: 1.) space- I only have one slot, and for heat reasons, I wanted to keep it open if I could. 2.) I didn’t really need much more power than what the integrated video provided. The motherboard I chose actually had more power than the stand-alone card on the old system. All it really needs to do is handle HD video, and the built in video (equivalent to ATI Radeon 4200HD) should be able to do that without breaking a sweat. If I wanted to play high end video games, it might be and issue, but first and foremost, this is a TV computer. Alright, so what motherboard did I end up going with? I went with the Gigabyte MA785GMT-UD2H. It basically had everything I needed, integrated video, good audio chip, lots of ports, along with pretty good reviews and a good price. This is an AMD board, so I ended up with an older AMD processor. Normally I’d go with Intel since I think they make a better chip at this point in time, but I grabbed an AMD Phenom II X2 545 Callisto 3.0GHz chip this time around. It’s a much more powerful chip than what I’ve got in the old box (which handles just fine), and I liked what AMD offered for motherboard packages in the form factor I needed better. Everything went together pretty well with one issue (that I probably should have researched a bit more to begin with). The CPU cooler I bought (Scythe SCSK-1100 Shuriken CPU Cooler (Rev. B)), did not fit with my DVD drive in place. The drive was a bit long, and ran into the fan on top, so I had to scrap the cooler and go with the stock one that came with the chip. It is a tiny bit louder, but not something I’m worrying about at this time.

Video Capture:
Video capture hasn’t changed too much with this new machine, but I still wanted to list what I’m using. I’ve got two Hauppauge Low Profile TV Tuner Cards (WINTV-PVR 150MCE-LP) that have been humming away without any problems for several years. These do the standard def. capture, and have been real work-horses. For HD capture, I’m still using the SiliconDust HDHomerun that I wrote about a couple years back. I did change how that box routes video to the HTPC though. Previously, I had a USB Ethernet adapter specifically for the HDHomerun (it delivers video via the network card). That USB adapter has always been a bit flaky, so I moved the HDHomerun up to one of our guest rooms and split the cable for both tuners in the HDHomerun. I plugged the device into our home network (we’ve got ports in every room), and now have two HD tuners where before there was one, and can access that HD video from any computer on our network, including the new HTPC down in the living room. The reason I didn’t have both tuners hooked up before was I couldn’t split the cable any more in the living room. It was already split four ways (TV, SD capture 1, SD capture 2, HDHomerun), and was already noticeably degraded. So by moving it up to an unused cable port in the bedroom, I’ve got higher quality SD in the living room, and now clean clear cable for HD coming from the bedroom. We can now record/view two HD channels at the same time.

Input:
There really isn’t anything new here with the recent build, outside of the new remote, but it’s really nothing special (just a generic windows media center remote). I did want to mention and upgrade I made in April to the keyboard though. I bought a Logitech diNovo Mini keyboard that I’m really happy with. I had issues with the previous MCE keyboard interfering with the TV (apparently they were both using the same IR signals). This new diNovo is bluetooth, and works really great! It also has a better, smaller form factor.

Software:
What on earth will this super-duper-TV-recording-video-watching beast run for software? That’s a good question, and one that probably should have been answers at the top of this article, since it is what prompted the hardware update to begin with. Quick answer: it’s running Windows 7 Media Center (for now). On the previous build, I had a somewhat clunky setup of Meedio, which has long since morphed into something totally different than what it was when I started (it has been sold, purchased by Yahoo, given up on by Yahoo, opened, and rewritten). For TV capture (the Tivo-like function), I was using an application called Stapstream BeyondTV previously, but that has recently been basically abandoned as well. Are you noticing a theme here? I took a look at the HTPC software landscape, and decided at this point in time, Windows 7 Media Center was the best way to go. It’s got a pretty big user community behind it, and works pretty well right out of the box. I also like that Microsoft has just opened up Media Center for CableCard use as well. That means I can hook it to HD cable from a provider without a cable box. Essentially the HTPC becomes the cable box with use of a CableCard from the cable company. Previously this was only available to computer manufacturers. I’m not using this feature now, but like the option for future upgrades. SiliconDust is working on a CableCard box, as well as a nice looking one from a company called Ceton. Some day I’ll be able to record shows in HD from channels other than the big networks. All in all, I’ve been happy with Media Center. It has a nice plug-in for Netflix streaming, as well as Internet TV. I’ve also worked Hulu Desktop into the mix, and connected Media Center to our SlingBox software as well. I still don’t like the proprietary format it records with, but haven’t run into any walls yet converting it to something more portable. They’ve done some nice interface things since the last time I played with it (XP Media Center), and it’s very easy to use without a lot of messing around. You shouldn’t need to read a manual to operate your TV. Generally I’ve been happy with Media Center, but if something better comes along, at least the machine itself is now flexible enough to run it.

Check out my HTPC (#2) Flickr Set for more images and information.

Looks nice, wish I had seen that motherboard before I built mine. I ended doing an addon card with HDMI..would have been nice to just had it built in along with the digital output for audio.